In 1888 a very different type of collection was donated to the Library: the Cummings Natural History collection. The Hon. John Cummings (1812-1898), donor of the collection, was the President of the Board of Library Trustees and was also the uncle of the Library’s major benefactor, Charles Bowers Winn. Although he had attended Warren Academy for a time, Cummings, the great-grandson of one of Woburn’s first tanners, David Cummings, was largely self-educated. He was the senior partner in the tannery of John Cummings & Co., which employed about three-hundred men; he also owned a successful farm of 1500 acres in the west side of Woburn. He was President of the Shawmut Bank in Boston, a Director in the Boston & Albany Railroad and the Eastern Railroad, a Charter Member and for 17 years Treasurer of MIT, President of the Woburn Five Cents Savings Bank, and a State Senator. To add to his long list of accomplishments, John Cummings served as President of the Middlesex County Agricultural Society and was a member of several Boston literary and scientific associations including the Boston Society of Natural History. His keen interest in natural history would lead him to amass a large collection of mounted birds, fossils and minerals which he gave to the library.

Natural history was a popular topic in Woburn in the second half of the nineteenth century. The Woburn Natural History Association met regularly through the early 1860’s with John Cummings serving as President. After a two year hiatus the association reformed in 1866, offering a series of ten lectures to the public, the first of which was on the topic of zoology. According to the Middlesex Journal there was considerable interest in the association, and the lectures, by many town residents who had never studied or attended lectures on natural history. Learning about the wonders of natural history had a clear religious component. As a Journal writer of the time observed, “As the mind takes in the vastness, the perfections and the beauteous in nature, the soul glows with an inward fire and yearns for a nearer companionship with the Infinite.”

A majority of Cummings’ specimens dated to the Jurassic period (199.6 to 145.5 million years ago), and were reportedly purchased from the early British dealer, Bryce McMurdo Wright.  The collection included representative fossils from most of the well-known localities of Western Europe including Lyme Regis, Dudley, Bristol, the southeastern chalks and other localities in England; the Paris Basin and other areas in France; a few Solnhofen pieces from Germany and even the Prague Basin. It consisted of 4,711 specimens in the following four classes: paleontology (3,189 specimens), mineralogy (1,063 specimens), geology (180 specimens) and ornithology (279 specimens). The collection, at the time of donation, was said to be worth $10,000. It was exhibited in the Library’s Octagon room, the subject of next week’s blog post. 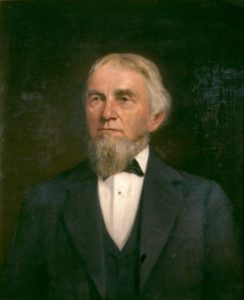 Portrait of Hon. John Cummings at the Woburn Public Library