The Octagon room was designed by the Library’s architect, Henry Hobson Richardson, to house a museum, as indicated in his plans for the space. The room, however, had been fitted up as a ladies’ reading-room in 1885, prior to the donation of the Cummings Natural History collection, to make use “of the unoccupied art hall.”  The room was furnished with silk curtains for the upper windows; a heavy fabric was draped at the entrance, and a large oak table was placed in the center. Stuffed arm chairs, sofas and rocking chairs allowed for comfortable seating. An attendant was provided “to take care of the wants of the lady visitors….” After the Cummings donation was received in 1888 the room also became the home of the Natural History Museum, fulfilling the Trustees and Richardson’s original intentions for the space.

To exhibit the Cummings collection, the Library had custom cabinets built, made of butternut wood to match the finish work throughout the library. The cases, which featured sloped shelves to display the specimens, were made to fit closely together along the seven walls of the room. The cabinets were constructed by George E. Fowle, a respected home builder in Woburn, who went on to build stately homes such as the Colonial Revival George A. Simonds house on 1 Arlington Street, now home to the Arthur P. Graham Funeral Home. Two of the cases had specially made drawers at the bases to house the many small specimens in the collection, too numerous to display. The collection was arranged by Maria E. Carter, a resident of Woburn. In 1889, soon after the museum was installed, Baldwin Coolidge, a native of Woburn, was hired by the Trustees to photograph the Library.

Two of Baldwin Coolidge’s thirty photographs depict the Octagon room, showing the Fowle cases arranged around the perimeter of the octagon.  A group of mounted birds, “rich in local specimens” filled one whole cabinet with a few birds placed on top. The rest of the collection was exhibited in the other cases with fossils, an antler and herbarium specimens displayed above. The round table and assorted furniture at the center of the room attests to its dual use as both a museum and a ladies’ reading-room. Coolidge’s photographs of the Library won silver medals in the Exposition Universelle de 1889 in Paris that year. The award was a source of pride in the city, with the Woburn City Press reporting that “the superiority of the library itself over similar institutions was recognized by the award of medals.”  The Natural History collection was widely viewed and appreciated by visitors from outside the city, as noted in William R. Cutter’s annual Librarian’s Report of 1894. The Octagon room remained the home of the collection until 1914 when the Children’s department moved into the space. The relocation of both the Natural History Museum and the Historical Museum to the Library’s third floor attic will be discussed in next week’s blog post. 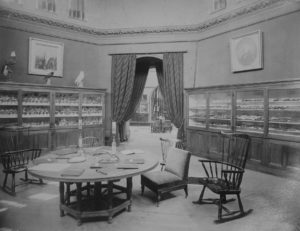