The origin of the Library’s Museum is closely connected to the founding of the landmark H.H. Richardson library building at 45 Pleasant Street. The Library’s benefactor, Charles Bowers Winn, left in his will a bequest to be used for building a public library in Woburn and directed that “a portion of the Library building…be set apart and devoted to the object of having a suitable place for exhibiting pictures, and more especially oil paintings.” Along with his real estate and personal property Winn donated his large collection of more than fifty oil paintings, acquired over his lifetime, to be hung in the Library’s art gallery. At the time public libraries were seen as places for more than books: they were thought of as spaces that were ideal locations for exhibitions that would offer cultural enrichment to the community. The program developed for the five architectural firms who bid on designing Woburn’s library included space for a museum to house the natural history collections of John Cummings, Charles B. Winn’s uncle. It is not surprising then that within one year of the new Library opening to the public in May of 1879, the Library Committee, as the Library Trustees were known at the time, had also begun to accept objects to create an historical museum. They voted on March 1, 1880, that the committee chairs, Leonard Thompson and Nathan Wyman, be authorized to accept from Mr. William B. Harris “such articles as they deem desirable for furnishing the Antiquarian Room.” Harris’s donations of objects over time were significant and his early and active involvement in the effort attests to his importance to the creation of Woburn’s historical museum.

William Brooks Harris was born in 1810 in New Ipswich, NH to William and Hannah Harris. He was a cousin to George M. Champney, the first Librarian in the 1879 building, who was also a native of New Ipswich. Harris married Eliza Murray, born in New Chester, NH, on April 3, 1831 in Medford, MA. The couple moved to Woburn in 1832, soon after their marriage, and raised a family of seven children, eventually settling on a farm on 185 Lexington Street. The family would experience tragedy with the death of two of their sons at a young age.  Hugh M. died of typhoid at age 17 in 1858, and their youngest son, Andrew Jackson, died at age 18 in 1862, also of typhoid, in a hospital in Halls Hill, Virginia; he was the first Woburn-born fatality of the Civil War.  Harris was a “war Democrat” known locally as “The Soldier’s Friend” for his many contributions to Union hospitals and commissions. The loss of his youngest son in the Civil War must have played a large part in shaping Harris’s philanthropy and his concern for Union veterans.  After he passed away in Haverhill on October 7, 1890, his memorial service, at his home on Lexington Street, was attended by many members of Woburn G.A.R. Posts 33 and 161 who came to pay their respects.  Clearly “Uncle William” as he was known by his friends, was well respected in Woburn.

On January 6, 1881 in an article titled “Linking the Present with the Past,” the Woburn Advertiser reported that “Our townsman, William B. Harris, who has been for some thirty or forty years past engaged in making a collection of the household articles, clothing, farming and mechanical appliances of former years, has contributed largely of his collection for the purpose of fitting up an old time kitchen in the basement of the Library Building….”  It was hoped that the Museum, which would become known as the Colonial Kitchen, would “give a good idea of how people lived 50 to 100 years ago.” To exhibit the objects a replica fireplace was constructed, using an eighteenth century mantlepiece, obtained from the John Winn House at 4 Winn Street, Burlington, formerly part of Woburn. During the Revolutionary War period this house was operated as a public house, and was known locally as “The Three Chickens Tavern” for the sign in front featuring the Winn family shield, illustrated with three spread eagles. To complete the setting of a family hearth, with the Winn mantle providing historical accuracy, four foot logs were set in the fireplace and a crane, pot hooks and a trammel were installed with cast iron pots, kettles and a Dutch oven placed nearby. The scene was completed with the addition of a corner buffet, pewter platters, an old fashioned dresser, early chairs and tables, and a loom to the room.

Harris kept a good record of the origin of his collections and so we know the provenance of many of the objects he donated: important for understanding an object’s history. Donations to the new museum were recorded in an accessions “Gift Book” that is today part of the Archives collections. The first items recorded in the book were all Harris donations. They included: five pewter platters, including one from “the Johnson family, West Side Hills” and three from the Mcintire family of Burlington; thirteen pewter dining plates and two pewter butter plates from the Farnsworth Family of Groton, MA; and a two quart basin from the Roe Family of Andover, N.H.  Many other Harris donations followed leading William Goddard, Woburn’s Librarian in 1938, to write, “Mr. Harris collected and gave a large number of articles which it is difficult to enumerate.”  His example would lead other Woburnites to donate their own family heirlooms to the Museum. With the William B. Harris donations, the Library Museum, opened for visitors early in 1881, was off to a good start however its location, in the Library’s basement, would eventually become controversial, as will be discussed in next week’s blog post. 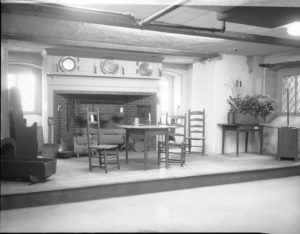