The library is available digitally 24/7. We are here to help! Check out our programming in the Events Calendar!

A book club for middle schoolers who like to have fun, insightful discussion and eat snacks!  We meet once a month to discuss a book.  Books are selected by club members.   For more information please e-mail Annie, Teen Librarian. 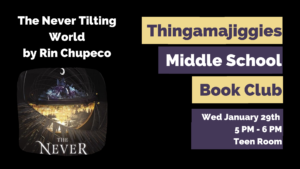 January’s Book: “The Never Tilting World” by Rin Chupeco. The meeting will take place on Wednesday, January 29th from 5 PM – 6 PM in the Teen Room.

Generations of twin goddesses have long ruled Aeon. But seventeen years ago, one sister’s betrayal defied an ancient prophecy and split their world in two. The planet ceased to spin, and a Great Abyss now divides two realms: one cloaked in perpetual night, the other scorched by an unrelenting sun. While one sister rules Aranth—a frozen city surrounded by a storm-wracked sea —her twin inhabits the sand-locked Golden City. Each goddess has raised a daughter, and each keeps her own secrets about her sister’s betrayal. But when shadowy forces begin to call their daughters, Odessa and Haidee, back to the site of the Breaking, the two young goddesses —along with a powerful healer from Aranth, and a mouthy desert scavenger —set out on separate journeys across treacherous wastelands, desperate to heal their broken world. No matter the sacrifice it demands.” 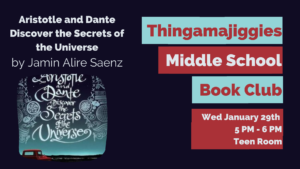 December’s Book: “Aristotle and Dante Discover the Secrets of the Universe” by Benjamin Alire Saenz. The meeting will take place on Wednesday February 26th from 5 PM – 6 PM in the Teen Room.

“Aristotle is an angry teen with a brother in prison. Dante is a know-it-all who has an unusual way of looking at the world. When the two meet at the swimming pool, they seem to have nothing in common. But as the loners start spending time together, they discover that they share a special friendship—the kind that changes lives and lasts a lifetime. And it is through this friendship that Ari and Dante will learn the most important truths about themselves and the kind of people they want to be.”
(From Amazon.com)

March’s Book: To be Determined in the January Meeting

Aristotle and Dante Discover the Secr...

A World Without Heroes

An Ember in the Ashes